Association for the Study of Jewelry and Related Arts
www.asjra.net 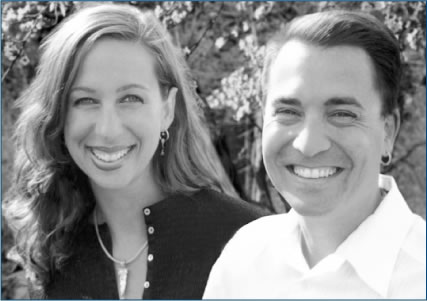 In the Zaffiro jewelry design studio— located a short stroll from their 1914 Craftsman home in Walla Walla, WA— Jack and Elizabeth Gualtieri carry forward the artistic legacy of ancient Etruscans. In their workshop beyond the lush garden full of hot peppers, neatly riotous rows of tomatoes, and other gorgeously arranged fertility, the award-winning jewelers practice an art form that first appeared 4000 years ago in and around Italy and Greece.

The technique called granulation, is a decorative process that consists of applying miniature spheres of gold (or, in its modern adaptation, platinum) to a similar surface and then heating the entire piece to a temperature high enough to form a permanent bond between the surface and the spheres. If the spheres are over-fired they’ll melt onto the surface; if under-fired, they won’t adhere properly.

From the highly polished and beloved espresso machine in the busy kitchen to the handcrafted racks in the wine cellar, to the eclectic original artwork they’ve acquired throughout their travels, everything in the Gualtieris’ house is about creative expression, about inspiring a mood or evoking an emotion. As artists, the couple have surrounded themselves with beauty, from the vineyards producing world class wines surrounding their town, to the passionflower intertwining up a trellis they designed and built near the front porch of their 100-year-old house.

“We just love well-crafted things,” Elizabeth explains, showing off her collection of costume jewelry. “Whether we collect them or make them.” She refers to a quote from the artist William Morris, who once said, “Have nothing in your house that you don’t know to be useful or believe to be beautiful.”

“We’re like magpies—we love pretty, shiny things,” Jack adds, “Most of the things we collect are highly detailed, much like our own work.” The Gualtieris are artists, but not “artsy” in the traditional sense, insisting for example that the words “oeuvre” and “milieu” never appear anywhere on their website, or in this profile.

Their love of artistic pursuits extends to voracious reading (including art books for inspiration), collecting wines for their cellar, woodworking and historic renovation of their own home, and gardening and cooking.  To know how the Gualtieris live is to see into their careers as artists of the highest order, practicing a demanding specialty that makes them highly sought after. According to Elizabeth, very few jewelers in the United States earn a living by creating granulated jewelry.

“There’s a limited number of artists because it’s so labor intensive,” she says. “You have to do it full time to be proficient, or you lose your touch. It takes even longer to become an expert and there’s a steep learning curve.” In creating their unique pieces, the Gualtieris combine their artistic vision with skillful, scientific precision, working in a medium they control but also allow to run a little wild on occasion. All of which may explain why the granulation technique has been lost several times over the centuries.

Elizabeth first encountered granulated jewelry in an archaeological museum when she was studying language in Florence, Italy. Back at the University of Kansas, she learned the basics of the technique from her metalsmithing professor— a former student of John Paul Miller, the 20th century incarnation of ancient granulation masters. She loved antiques as a child, and remembers that her father traveled to India when she was very young and brought home incredibly decorative artwork, such as an exotic chess set that still sits in the Gualtieris’ living room. Early exposure to high design clearly had an effect on her ultimate career choice even though a childhood aptitude test suggested she become an auto mechanic.

Jack, who was studying industrial design when the couple met while working at a custom jewelry store, collected seashells as a child and wanted to be an architect, but found that field imposed too many rules on his active imagination. While designing and handcrafting granulated jewelry imposes its own requirements of technique, it has also allowed Jack’s creative side to blossom.

Jack and Elizabeth also learned the business end of being goldsmiths/jewelers from that in-store experience during and right after college. Elizabeth says, “Peter, the owner, was my mentor, and we learned many of our good business practices and proper jewelry standards from him.”

After college and marriage, the pair studied and practiced granulation in Santa Fe, New Mexico. They established their own studio in Portland in 1996 and then relocated to Walla Walla in 2019.  They’ve experimented with non-traditional color combinations for granulated jewelry and developed alloys and techniques for granulating in 22 karat rose and white gold, as well as platinum. They work almost exclusively with recycled gold. Currently they are expanding their work to include the techniques of chasing and repousse- another set of skills requiring a high degree of precision and control.

Much of the couple’s work incorporates colorful gemstones, and reflects influences as varied as Etruscan craftsmanship and urban architecture. “Most of the time our pieces are inspired by specific stones,” Elizabeth says. “We pick stones based on their personalities—they will let us know what they want to be.” Jack adds, “Sometimes we design a piece around a specific unique gemstone and sometimes one of us has a vision or inspiration that needs to be created, and we find the right stones to make the idea work.”

Zaffiro’s (the name means sapphire in Italian) fanatically original pieces incorporate shapes and colors of stones from around the world—and not always the ones you’d expect. The top five stones that appear in their work are rainbow moonstones, boulder opals, unusually colored sapphires, baroque pearls, and tourmalines. The artists build every piece as a one-of-a-kind, highly original creation. While themes occasionally repeat, each granulation pattern is unique—making the pieces not only more beautiful but also adding to their value.

The Gualtieris name their collections after friends or beautiful plants or mythological beings related to the designs of the pieces in them. For example, their “Primavera” series is based on Karl Blossfeld’s photographs of flowers. The “Patricia” series was inspired by their favorite client, who wanted more sparkles (i.e. diamonds) in a piece. Jack and Elizabeth experimented with insetting gemstones inside gold granules to accomplish this effect. “We try not to be bound by price points, trends, or marketing considerations when we create a piece.” Jack explains. Much like their garden, he says, “The artistic process is organic.”

“We want people to have not only an aesthetic connection with our work but also some kind of metaphysical or transcendent connection,” Elizabeth adds. “We want our jewelry to be a manifestation of something beautiful inside the person.”

Zaffiro’s timeless, handcrafted modern heirlooms have won many national jewelry design awards and appeared in national exhibitions and books. Their BBQ sauce is pretty good, too.